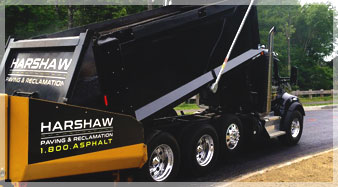 FROM THE GROUND UP

Owner Justin Harshaw started in the Asphalt Paving Industry out of high school. Gaining his CDL license he became a truck driver hauling asphalt on day to day functions. Shortly after getting a grasp of the process of asphalt paving, Justin became an estimator within the company he worked for. Throughout this time Justin learned how to operate just about every piece of excavation and asphalt paving equipment as well as manage crews as a superintendent and participate in building an Asphalt Drum Plant. After many years in the industry he was approached and hired by one of the largest paving companies in the world. During this time he held a role as an Estimator in Sales and a Superintendent for his territory. Justin was the only one in the North East region to achieve the ability to manage both positions. By the year 2013 Justin was again asked to join in the development of another larger asphalt plant. Soon after the construction of the new plant was completed and in operation Justin decided it was his time to achieve his dream and start his own company.

Being a private family owned company, Justin named the company using his last name and incorporated Harshaw Paving & Reclamation. As a determined businessman and leader Justin wanted to not only develop a great company that performs exceptionally well for their customers but wanted to employ the best in the business and equip them with state of the art equipment to be the best in the industry. Our team has a unique capability to pave projects from a residential driveway and sidewalk to a commercial parking lot or municipal roadway. We own pavers from 5′ wide to 20′ wide and rollers that weigh 1 ton to 14 ton. Combined with our expertise in the Asphalt Paving industry and the unlimited resources we utilize, we continue to successfully work in areas throughout Eastern Massachusetts, Northern Rhode Island and Connecticut. Harshaw Paving & Reclamation works as an general contractor on multiple projects requiring Asphalt Paving. It is not unusual for Harshaw Paving & Reclamation to produce additional requirements such as Excavation, Asphalt Milling, Reclamation, Fine Grading, Drainage and Site Reconstruction.